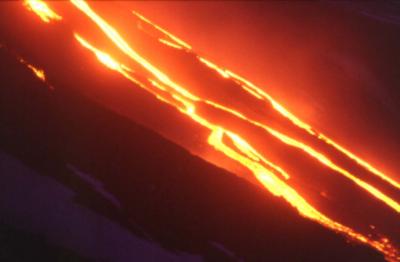 The effusive activity that began on 4 February 1999 from a fissure on the southeastern base of the SE Cone is continuing, and lava continues to flow into the Valle del Bove, forming a flow field composed of numerous sub-parallel and overlapping lobes. The activity was particularly well visible from Catania and other locations to the east of Etna yesterday evening, the flow field being incandescent over all its length from the western rim of Valle del Bove down to about 2000 m elevation. Today, the local newspaper "La Sicilia" has an article with spectacular photos which were taken by photographer Fabrizio Villa, on the same day I took the photos presented on this page (above and at right).
On 3 March, the activity was observed by Giovanni Sturiale and Boris Behncke (Istituto di Geologia e Geofisica of the Università di Catania - IGGUC) and Christophe Baudin, a visitor from Belgium. Two of them (Behncke and Baudin) climbed to the summit of the SE Cone and made a survey of its northern flank where effusive activity occurred during the 4 February eruptive episode.
The Southeast Cone. Behncke and Baudin walked around the eastern side of the cone to the lava field emplaced between December 1998 and 4 February 1999 and then climbed towards the notch in the northern rim of the SE crater. During the latest erruptive episodes, lava had flowed through this notch and then turned northeast at the base of the cone. There was no evidence that any of this lava had been produced by any vent other than the SE Cone's summit crater, and the most recent lava, of 4 February, was covered with a thin layer of reddish ash and showed no heat emission from its surface.
The floor of the notch which was inclined upwards towards the crater was a flat channel about 3-5 m wide and covered with rubble, while the width of the notch at its rim was 15-20 m. Dense gas and vapor prevented a close approach to the crater, forcing the visitors to climb the western side of the notch towards the northwestern crater rim. Only a few very brief glimpses were caught of the interior of the crater, but it was evident that at several tens of meters depth there was an inner terrace surrounding a narrow central pit. The width of the crater at its rim was at most 50 m, maybe less. Gas and vapor escaped from several fumarolic areas on the southwestern and eastern crater rims. On the southeastern side of the crater there was a fuming pit about 15-20 m wide (Photo 2 below), possibly formed by collapse during the 4 February eruptive episode when the southeastern side of the cone fractured. Below this pit, on the outer flank of the cone, there was a vigorously steaming fissure segment extending about 100 m downslope, ans below this there was the oval-shaped main vent of the 4 February episode which produced no gas emissions. An irregular crack 0.5-1 m wide extended from the lower end of this vent towards the still-active eruptive fissure, neither was there any gas emission from this crack.
The view from the southern rim of the SE Cone permitted a commanding panoramic view of the active fissure and its lava flows, and besides this created an awesome sensation to a person (Behncke) who had been approximately in the same (geographic) spot tens of times in the past two years - when this spot was still tens of meters lower and much more accessible.
During the visit no sign of eruptive activity at the SE Cone was observed, nor was there any evidence that such activity had occurred recently. There were no fresh ejecta on the crater rim and within the notch on the northern side, and no noises were heard from within the crater.

While effusive activity from the 4 February fissure continues since 26 days, this morning there are also renewed ash emissions from the southeastern vent in Bocca Nuova. Since there is no wind today in the summit area, a huge gas plume is rising majestically from the volcano. A group of geologists from Istituto di Geologia e Geofisica of Catania University is due to visit the summit of Etna tomorrow, and more information about the activity as well as a new map will be provided afterwards. See photo at right for an impression of the view of the volcano from Catania on the evening of 2 March.