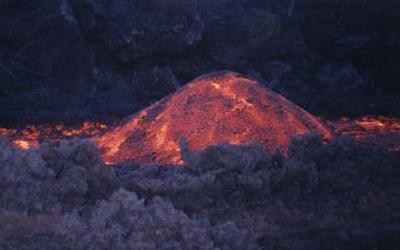 A brief period of improved weather yesterday (24 March) permitted good views of Etna and the site of the current eruption. Lava continues to flow into Valle del Bove, although less lava is visible at the surface than about two weeks ago. While a major flow issues from an ephemeral vent about half way down the western slope of Valle del Bove, several smaller flow lobes were visible on the crest of the Valle last night. The eruption is now going on since seven weeks and shows no signs of diminishing. The new surface flows above the rim of Valle del Bove were probably caused by a blockage of one of the main lava tubes and subsequent surface breakouts, a phenomenon often observed at Kilauea, Hawaii. Giuseppe Scarpinati (Italian correspondent of the Paris-based European Volcanological Association "L.A.V.E." and resident in Acireale with a commanding view of the mountain) reported that during a visit on the last weekend by a friend and "fairly accurate observer", no activity was observed in any of the two large summit craters, Bocca Nuova and Voragine. This observation confirms that all magma rising within the central conduit system of Etna is currently erupted from the fissure formed on 4 February.

Poor weather has precluded observations of Etna's activity during the past week, and no information about the current progress of the effusive activity initiated on 4 February is available. During most of the time, the volcano has been shrouded in clouds, and during the few glimpses no morphological changes or changes to the activity at the summit craters were observed. The lava flow into Valle del Bove is still hot, but no nocturnal observations have been possible in order to ascertain if lava is still flowing. As soon as weather conditions permit a view of the volcano at night, new updates will be posted on this page. Late-March to early April is usually a period of unstable weather in Sicily and it may be difficult to observe Etna or climb to its summit during the next few weeks.

Two days after the latest visit by Behncke and others, the eruptive fissure and the area of flowing lava were again visited by geologists of the IGGUC (Behncke, Monaco, Giampiccolo and Bianca) on the late afternoon of 13 March. Good weather conditions and the ongoing effusive activity attracted hundreds of tourists, and the area where lava appears at the surface and spills down into Valle del Bove was overcrowded with curious spectators, photographers and volcanologists from Italy and abroad. As for the effusive activity, there were only minor changes as compared to the situation seen (with much less people around) two days earlier. The southern lava flow breached on its southern side and numerous branches were seen spilling over the rim of Valle del Bove. Nothing much had changed at the northern lava flow as far as could be ascertained. The output was still as high as 5 cubic meters per second, and this effusive eruptive episode that began on 4 February is thus estimated to have produced more than 15 million cubic meters of lava, an amount that would well fit a classification as a typical "slow" flank eruption of Etna (Etnean flank eruptions are generally classified into those with relatively low effusion rates, such as the 1983 and 1991-1993 eruptions, and high-effusion rate eruptions like those of 1981 or 1989).
What was certainly most impressing during the 13 March visit was the presence of countless people in the eruption area. Many of them were local mountain guides and volcanologists, including groups of Catania's Istituto Internazionale di Vulcanologia, of the University of Palermo, and from the UK. However, they were largely outweighed by the crowds of tourists who flocked around the skylights and effusive vents, and work was at times difficult amidst all these people. Although the ongoing eruption is not accompanied by any appreciable explosive activity in this period, non expert visitors to the area, if they are not accompanied by guides or volcanologists who know the place, risk to get injured while walking on the fresh lava fields, or to get burned near skylights and active flows.

A group of geologists (Boris Behncke, Mariangela Porravecchio, Giuseppe Paradiso and Antonella Lentini - from left to right) of the Istituto di Geologia e Geofisica of the University of Catania (IGGUC) visited the eruptive fissure at the base of the SE Cone yesterday. Above the rim of Valle del Bove, all lava was now flowing in tubes, and only a few skylights indicated the course of the lava in this area. There are apparently two main lava tubes about 30 m apart at the rim of Valle del Bove. The more southerly tube ends just above the crest of the Valle where the lava appears at the surface to form a braided stream, and two more ephemeral vents emit lava a little further downslope. The northerly lava tube extends much further into the Valle, and surface flows appear only half way down its western slope, at, say, 2500 m elevation. The active flow fronts appear to be quite a bit above 2000 m elevation and the southern edge of the lava field may extend further south than indicated on the 3 March map above. No activity has occurred at the hornitos in the uppermost part of the fissure, but degassing is occurring from several incandescent fumaroles. Geologists from Palermo University measured temperatures of about 1030 degrees in one of these fumaroles.
There appeared to be little activity elsewhere although something that appeared to be a phreatic steam explosion from Bocca Nuova's southeastern vent area occurred at around 1300. It formed a convoluted clouds but contained little or no ash, and it produced no sound. When descending from the summit area at dark, no incandescence was visible at the summit craters.