The earliest records of activity at Stromboli date back to about 300 BC, and since then, a continuously growing number of reports about Stromboli, its geology, petrology, and eruptive history as well as ongoing activity have been, and are still, published. However, it is only since the late 19th century that the activity of Stromboli has been documented reasonably well and geologic studies were done. A large proportion of the early studies dealt with the morphologic developments at the craters (e.g., Anderson 1905 and Washington 1917).

Photographic record of the active craters was kept beginning in 1889 (as far as I know). Below are a few of the early photographs compared to one taken by myself for comparison.

Images of the crater terrace of Stromboli taken from the south. Reference point is the so-called "Torrione", the uppermost part of the Filo di Baraona which is the scarp bounding the Sciara del Fuoco on its southern side. Full-size, commented versions of these images can be obtained when clicking on the photos.

Below are some photographs of Stromboli in eruption during those early years. 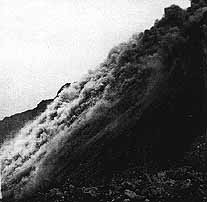 Small pyroclastic avalanche on the upper Sciara del Fuoco on 4 March 1901. The avalanche appears to be caused by the sliding of abundantly falling bombs and ash, a rather uncommon event at Stromboli. A similar avalanche occurred at the beginning of the most recent major lava outflow in December 1985. Activity of this kind is probably driven by magma interacting with shallow water in the volcanic edifice. 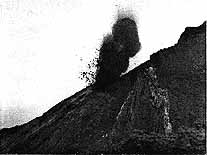 Spectacular Strombolian explosion with ejection of large bombs on 4 March 1901. This type of activity contrasts with that illustrated in the preceding photo. Both images were taken from Brun (1909).

Successive views of an unusually strong explosion of Stromboli, seen from Stromboli village, on 13 November 1915, during a period of greatly increased explosive and effusive activity. The eruption column visible here is at least 1.5 km high, a height rarely reached at Stromboli. The black part of the column at its right base (arrow in right photo) is what appears to be a small pyroclastic flow descending the Sciara del Fuoco (right photo taken from Perret 1916; left photo from a 1930's edition of the Enciclopedia Italiana, both taken by Perret). 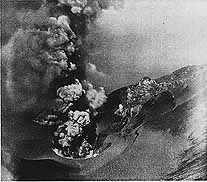 A peer over the lip of one of the active craters in 1926 during an ash eruption. The daredevil who took this photo was J. Teichert (1931).

Continue with The 1930 eruption of Stromboli

Back to STROMBOLI home page

Back to BB's volcano home page