Komagatake, or Hokkaido-Komagatake, on the northernmost of the four Japanese main islands, erupted suddenly on late 5 March 1996 (local time), following almost 54 years of repose. The eruption, featured intensely on the WWW, has been phreatic so far, with no juvenile material recognized in the ejected tephra so far (as of 20 March 1996). The eruption seems to have subsided on 12 March.

A set of beautiful aerial views of the eruption has been made available by Tatsuro Chiba. Due to the limited accessibility of his site, some of his photos are mirrored here (that is, at GEOMAR, Germany, and at MTU, USA). Photos of the last major eruption of Komagatake, in June 1929, shown below, are intended to illustrate the volcano's dangerous potential.

The 1929 eruption of Komagatake volcano

Komagatake volcano has had four major eruptions (VEI 4 or larger) in the past 400 years, in 1640, 1694, 1856, and 1929. The 1640 event was accompanied by a debris avalanche that entered the nearby sea, causing a devastating tsunami which left widespread damage and 700 people dead. While no significant effects are known for the 1694 eruption, more than 20 people were killed by pyroclastic flows in 1856.

Eruption column rising from Komagatake on the afternoon of 17 June 1929. The coast north of the volcano is visible in the foreground.

The most recent major magmatic eruption of the volcano occurred on 17 June 1929, with minor activity continuing for seven weeks. The eruption soon became very vigorous, forming a broad and tall eruptive column (see photo above). Pyroclastic flows spread in all directions from the crater, a small circular pit in the center of the vast summit platform of the volcano (photo below). The eruption caused widespread damage, but only two people were reportedly killed. 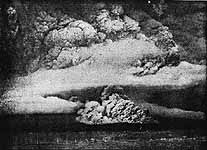 Pyroclastic flow moving down the SW flank of the volcano on the afternoon of 17 June 1929. This particular flow passed within 200 m of the village of Yakeyama.

The longest pyroclastic flows occurred on the N flank of Komagatake, reaching the sea at a distance of about 6.5 km from the crater.
The most vigorous activity was essentially over after daybreak on 18 June 1929, but minor activity continued until 6 September 1929.

A late afternoon view of the Komagatake eruption of 17 June 1929. The impressive dark eruption column rises to more than 12 km altitude, and pyroclastic flows spill out radially from its collapsing base.

More info about Komagatake is available at the follwing sites:

And for another taste of Tatsuro's volcano treasures, click on this image of Unzen, Japan's famous Decade Volcano