While the activity of Stromboli during years from 1930 until 1939 was thoroughly documented by Abbruzzese (1935, 1937, 1940), information is scanty for the war years and the postwar period. A summary of the activity from 1940 to 1953 was given by Cavallaro (1957a); this, however, was far from complete, as the author acknowledged. Then, there was a period of much better documentation in the mid-1950's, mostly thanks to Cavallaro (1957b) and Cucuzza-Silvestri (1955).

The period of 1957-1972 is one of the least documented at Stromboli during this century. However, for the years 1957-1959 there exists a reference that is poorly known and has been cited in none of the major reference lists dealing with Stromboli's eruptive history (e.g., the new Volcanoes of the World edition of 1994 - which otherwise is a remarkably complete reference work - , Pichler's 1981 field guide and in the volcanic hazards evaluation paper by Barberi et al. 1993). Cavallaro (1970) reports two periods of lava effusion during the year of 1958 and two more in 1959 not reported elsewhere, presenting the map below (figure 4) of the distribution of lava flows on the Sciara del Fuoco. 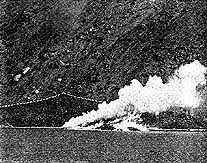 Lava effusion at the base of Sciara del Fuoco, in February 1955. Final extent of the 1955 lava apron is outlined by a dashed white line. Photo taken by D. Abbruzzese.

One of the most peculiar eruptions of Stromboli in the period under review occurred in February 1955. Lava issued at the base of the Sciara del Fuoco, building a small peninsula (photo above). The event was widely reported as a submarine flank eruption of Stromboli. However, more recently, researchers have interpreted the eruption as rather "normal" and suggested that the lava issued from a lava tube extending down all of the Sciara del Fuoco.

While the activity in 1957 was fairly normal (with a more intense period in July-August and very little activity in April and October), 1958 had an intense period beginning in late January, culminating on 5 February when up to 7 explosions were noted during a period of 30 minutes and vivid glow was seen at the summit from the inhabited areas. On the morning of the 6th, a lava flow began to move down the Sciara del Fuoco, arriving at the sea the next day. As usual on such occasions, there were violent interactions of the lava with the sea water. On the afternoon of 12 February, all effusive activity ended, but strong explosive activity persisted.

Still another period of lava emission began at around 1800 on 31 May of the same year. Lava issued from two vents situated in the crater nearest to the Sciara del Fuoco (maybe corresponding to the present Crater 2) and moved down the scree in two branches before uniting in the northern upper part of the Sciara from where a broad flow slowly descended towards the sea. During the first days of June, lava effusion continued while there were some powerful explosions at the craters. After 2 June, lava effusion showed signs of decreasing and completely ceased on the 5th. For the remainder of the year, explosive summit activity continued with some fluctuations.

1959 had several periods of increased explosive activity, culminating in two powerful explosions on 19 May and 11 July, lava outflow on 12-13 August, and more explosive (with minor effusive) activity on 6-14 September. The first of the explosions at about 0800 on 19 May ejected a large, dense tephra column and fallout of incandescent pyroclastics ignited some vegetation on the upper slopes. Two days later, a summit investigation revealed that the northernmost of the three craters then present (corresponding to today's Crater 1) had a very large bocca and four small conelets. The southern crater had three vents of which one erupted intermittenly while two vents in the crater nearest to the Sciara made "prolonged explosions" and "real and true fountains of lava" (Cavallaro 1970).

Highly inflated, pumiceous grayish-brown scoria were present in the summit area, but also as low as 480 m on the eastern flank of the volcano.

The activity remained elevated during the summer of 1959 and became particularly intense after 8 July. At about 1820 on the 11th, a large, black eruption column rose about 500 m above the summit and "smokes" were seen descending down the Sciara del Fuoco (probably a pyroclastic flow similar to the one erupted at the beginning of the 1985-1986 eruption). A ship near the island was in the area of heavy fallout but managed to get out. Heavy lapilli and ash fallout occurred at Ginostra as well and even to 500 m off the southern tip of the island (Punta Lena).

Several days later, volcano guides reported that "a notable quantity" of tephra had fallen in the summit area. During a visit to the volcano on 25 August, only one large bocca was seen within the northernmost crater (Crater 1), and the overall aspect of the place had dramatically changed since three months earlier. Cavallaro (1970) suspected that the 11 July explosion had been from this crater and destroyed the features visible within it earlier (similar events have occurred in 1993 and 1995 ). No significant changes had occurred at the two other craters. Pyroclastics up to bomb-sized fragments had fallen on the summit (Pizzo sopra la Fossa), and smaller fragments had fallen as far as the Vancori ridge.

Most of the ejected material was scoriaceous with minor quantities of glassy threads (Pele's hair) and loose augite crystals.
On 12-13 August, between the large explosion and the visit by Cavallaro, there had been a brief and intermittent effusion of lava, but apparently no flows reached the sea.
Activity began again to increase in early September 1959, culminating in a powerful explosion at 2330 on 6 September that caused a fall of incandescent pyroclastics in the eastern sector of the island, down to about 400 m elevation. A few hours later, lava was flowing down the upper part of the Sciara del Fuoco but did not form a significant flow. Intermittent trickles of lava continued until 10 September.
Another strong explosion occurred on 14 September at 0930, causing a fall os sand-sized tephra on the San Bartolo and Ficogrande areas of Stromboli village. Increased explosive activity persisted through the 16th and was followed by 8 days of quiet before, on the 24th, normal Strombolian activity resumed.

During the 6.5 years following the latest, September 1959, lava emission, Stromboli performed its normal explosive activity, with eruptions occurring from various boccas. Loosli (1963) gives a nice sketch of the crater terrace as viewed from Pizzo sopra la Fossa in early October 1961 (below, Figure 3), indicating that by then small spatter cones, or ramparts, had built around the vents. No larger craters similar to the ones present since at least 1972 were distinguishable. It is possible that the continuous normal activity led to the complete filling of such craters by the growth of cones, a process that is going on, with interruptions, since the early 1990's.

Sketch by Max Loosli of Stromboli's crater terrace as viewed from Pizzo sopra la Fossa, early October 1961. Note that all eruptive boccas have formed conspicious cones, and no features resembling larger craters are visible. From Loosli (1963).

A brief effusive episode is known from 9-12 April 1966, but details of this activity are nowhere available thus far. The much more voluminous and persistent outpouring of lava one year thereafter (Fig. 3-4), however, has attracted many tourists; there is surprisingly little scientific reference to this event. The paper by Gasparini et al. (1970?) describes only the very beginning of the eruption. In any case, one remarkable aspect of the 1967 lava outflow is that it was accompanied by a very reduced explosive activity. After the end of lava emission, on 13 August 1967, all eruptive activity at the craters ceased, and only gas emissions occurred from the craters for more than half a year (until May 1968).

Volcanoes of the World (1994) gives the volume of lava emitted during the 1967 eruption as in the range of tens of thousands of cubic meters which to me seems a very low figure. The lava entered the sea for a good while in that eruption. For a lava flow to reach the sea, it requires at least half a million of cubic meters, and I consider it more likely that the eruption produced a volume of lava similar to that emitted in 1985-86 (2.5 million cubic meters) or higher.

Press photo showing two lava flows reaching the sea at the base of Sciara del Fuoco on 1 May 1971. The effusive activity lasted only one day.

In the spring of 1971, Stromboli had two brief episodes of increased explosive and effusive activity. The first of these occurred on 31 March that year and sent two lava tongues down all the Sciara del Fuoco to the sea. The second episode occurred on 1 May and closely resembled the preceding event. Also on this occasion, at least two lava flows reached the sea (as visible in press photos of that time, see above).

Page set up in June 1995, last modified on 6 July 1996
Hosted by VolcanoDiscovery