The least known of the Decade Volcanoes 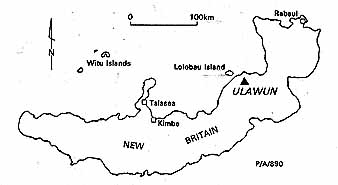 Ulawun in January 1967, shortly before or after a small explosive eruption. View is from Ulamona Mission (11 km to the NW). The NW valley is distinctly visible in the central upper part of the volcano. A major fault scarp looms above the western lower slope of the cone (right margin of photo). The photo was taken from Johnson et al. (1972).

Ulawun, situated on the island of New Britain is one of the most active volcanoes of Papua New Guinea and displays a wide variety of eruptive styles. This is why Ulawun was chosen one of fifteen Decade Volcanoes. Due to the 1994-present Rabaul eruption and its effects, little work has been carried out in the framework of the Decade Volcano Project, and no information is available on the WWW about this volcano.


22 confirmed eruptions and two possible eruptions are known from Ulawun through 1993 (table 1), the last major event occurred in November 1985 when voluminous pyroclastic flows and lava flows were erupted. Similar eruptions had occurred earlier in 1980, 1978 (involving a spectacular flank eruption), 1973 and 1970.

Vigorous ash emission from two vents within the summit crater and lava emission (arrow) and pyroclastic avalanching from a SE flank fissure during the initial stage of the May 1978 eruption (9 May 1978, at 1045). This photo is from McKee et al. (1981).

Eruption of Ulawun on 20 November 1985, at the climax of the 1985 eruption, seen from Ulamona Mission. Successiv pyroclastic flows spill down the NW valley of the volcano. Taken from Bulletin of Volcanic Eruptions No. 25 (for 1985).